In January 2020, the Top 100 Asian Golf Course List was launched in Golf Travel Magazine Korean version. Yulin Desert Golf Course not only made into the list, but ranked the 37th as a marvelous achievement for a newcomer. With rapid development of golf in Asia, over 4000 golf courses scattered in the east continent, that made the list a tough job. Yulin Desert Golf Course became a no-brainer as soon as the panelists setting their eyes to this pearl in the desert, as the accolade says so. It took fully 5-year efforts by the team led by owner and designer to convert this land into a beautiful fine art, which amazed the golf world. Jonathan Smith, the founder and executive director of GEO, the authoritative organization for the international golf environment, was among the first discoverers to the course in June of 2019, and was so moved by what he observed that he made a high recommendation in the ensuing GEO annual meeting. 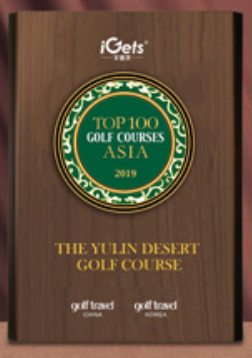 One month later, the 40 aforementioned panelists gathered in Yulin and examined extreme carefully. In November, Yulin was awarded by the Golf Digest as Top 3 Renovation Courses in China. Like the introduction of Yulin Desert Golf Course in the prizing night of Asia Top 100, golfers were in the heart of the desert challenging themselves, talking to the Nature with the joy of playing one of the top green in China. 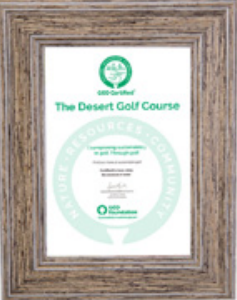 I want to take this opportunity to appreciate Lu Jun and his team have reached such height on the front of the sustainability through the world of golf. It has the essence the GEO stands for, from ecosystem reservations and services, to wellbeing of alleges and communities, and much more.

One thing is sure, this golf course is always in my heart. It is the vast sky and all the color make the unforgettable memory. Of course, them any holes of these course are so fresh. It is not a bold statement that 4 holes from N o. 15 to 18 are world class finishing holes.

Never before did I have such a natural impact deep inside when I walked into Yulin Desert, not even in Korea. And I also was amazed by one single fact that some panelists could easily draw the routing of the course when finished the round, meaning they had same strong impressing as I did. This course will be famed by its exciting creativity.