STORY OF THE GOLF COURSE 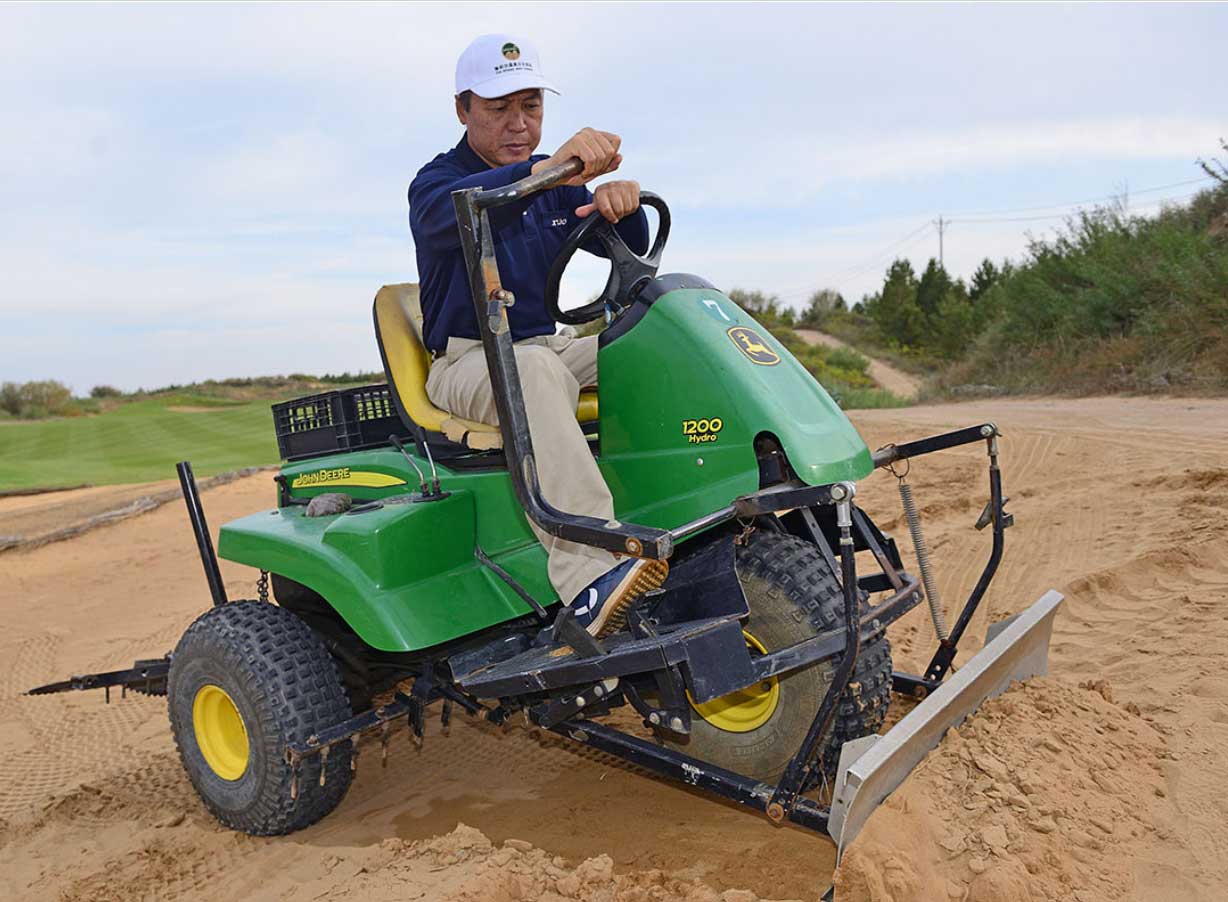 Finally, he found his dream land, right here in Yulin.

It has been thirteen years since his first visit, but the first sight is still fresh in Mr. Jun Lu’s memory. Speaking of the topography of northern China, no designers in China know better than Lu, who was born and grew up in Gansu, the neighboring province of Yulin. His works could be seen all around the country soon after his career as a course designer was launched. His works maps as many as seven 18-hole courses in Inner Mongolia, China’s second-largest plateau, among which the Viction International Resort, the first ever of the plateau, is still high appraised by golfers. At the moment Lu stood on the desert, he visualized fairways popping out of the sand. Just about the time, he was invited to take a look at land in Yulin for golf course construction. If design is inspired by God, then a good land is unprocessed jade waiting to be found.

In the afternoon, Lu arrived in Yulin, a city located at the northern border of Shaanxi province, 150 miles away from Erdos. What a view that was: on the southern edge of the Maowusu Desert, natural sand dunes kept rolling and rolling, together with the clusters of sand willows, exposed a sense of wild charm. “What a beauty embryo!” Lu murmured to himself several times, lost in the excitement.

Looking back to the 1980s, as a college student, Lu would have never thought that he would become a golf course designer in his career. With parents as senior intellectuals who participated in supporting the construction in the northwest China, Lu was an outstanding student who loved to read and then successfully admitted by university, majored in construction engineering in the 1980s and thereafter worked for an oilfield design institute after graduation. Soon he was promoted to be the deputy director of the civil engineering office, responsible for project planning and master layout design for a large residential area. It was a boundaries-crossing job for him, for an engineering major to do the whole planning, which serendipitously built the foundation for him as a golf course design later. In 1993 Lu joined Lanxing Golf, moving from northwest China to Beijing, that became the turning point of his career. And Lanxing is the cradle of the first group of Chinese gold course designers.

For many years thereafter, Lu had always pointed out that Chinese course designers had been put in a dire living situation because there was so little chance to study from the elites designers. The start as golf course designed in Lanxing was rough as all Lu got from the company was several sound clips, which was far less as reference and knowledge to design a course. Lu bought numerous golf related books and began to read those English golf books he could find, translated and studied them. It had been over ten years of persistent study, which seemed as a typical character deeply inscribed in the bones of the northwesters including Lu.

More precisely, it was a once-in-a-lifetime opportunity for him.At that time, with as many as 40 courses designed in the bag, Lu drilled his skills in the studio outside Beijing like a monk. He was not good at expressing himself openly, only enjoyed being a rigorous logic thinker.He once dreamed to discover a perfect piece of land and made it a perfect golf course without any external interference.Now a phone call made all the dreams into a reality.

He had been eager to study international golf norms and standards, read and researched as many details as possible. However, Lu found out those widely recognized works were not more than a standard, which not what he was pursuing to. People who don’t know him well would think of him as a quiet and humble person, but who know him would find a strong power behind his humbleness. What he had been waiting for is an trigger he could integrate all the knowledge and experience accumulated by years. Here she was, Yulin became the coveted one. 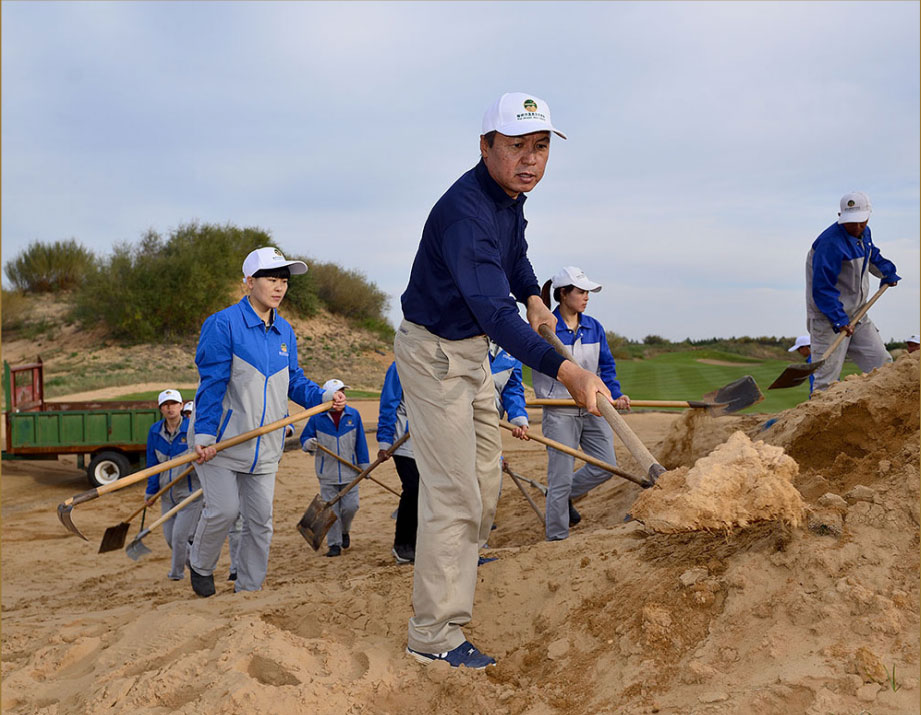 Nothing was easy for a dream land like Yulin, which had its fair share of hardships and setbacks. That piece of natural land was planned for two golf courses (A and B). Course A would be designed by Lu, while B an American designer. The first decade of 21st century witnessed the fastest development of Chinese golf industry with many good golf clubs and courses popping out like mushrooms after the rain, and western course designers expand their business to China as well. The competition was fierce to Chinese golf designer as they had to pay for much more effort and work to gain a similar opportunity. The problem emerged when market got tougher and speedy growth, such as the construction of golf course in most of the time would go against the designer’s idea and plan. Yulin’s Course A was one of the typical cases remained as a deep regret to Lu. Until the day a phone call he received regained his love and hate relationship with the sand dunes. The other end of the phone was Mr. Yunliang ZI, the owner of the Course B. After the separation from the Course A, Zi decided to invite Lu for its renovation. Being away from hometown for years, Zi had always wanted to do something meaningful to this land where raised him up. He hoped to tried his best to introduce a healthy and sunny lifestyle to the city to enrich spiritual and recreational life. The decision to invite Lu was based on his outstanding reputation among the local golfers for the last eight years. Zi gave full trust without intervention to Lu in renovation, which was rare among golf course owners. The unconditional support gave Lu the strength to build up a top course. Maybe in another aspect, it was a once-in-a-lifetime opportunity for Lu. At that time, with over 40 courses designed in the bag, Lu drilled his skills in the studio outside Beijing like a monk. Not good at expressing himself openly, Lu rather enjoyed being a rigorous logic thinker, and he would laugh off all those grievance and ridiculous rumors about the different treatment to Chinese and foreign designers.

Lu was finishing his transforming. He dreamt he could find a good land and create a perfect golf course without any interruption. The rebuilt of Yulin’s Course B was the dream of Lu coming true. At the age of 50, he brought all his knowledge and experience back to Yuli, plunging into the desert under the burning sun. And this time, he was not trapped by the standard and reign, nor any interference, but his strong love to this land. “I’ve always been attracted by the sand dunes and wild vegetation.” Lu tried hard to restore the natural landscape and put the concept of ecological environmental protection in the first place. “The soil here is particularly good for lawn growth, the climate here is suitable, and the management cost is one third of the courses in inland cities. The beauty here does not need to be modified as it is natural.” It sounds like Lu was talking about his beloved child when speaking of the advantages of this desert course.

Most people might not know how many times it took for rolling before the green became in good shaping when golfers enjoying the great experience the greens brought. Any carelessness would impact the shape of the green, even worse would result to inconsistency of greens. That was the reason Lu determined to operate the roller for shaping. The sun of northwest China was burning his skin, while the sand land as a cast reflector doubled the sunburn. Soon Lu was covered by black spot after the sunburn, which made his wife heart-broken, but he enjoyed every moment of his shaping work for over 4 months. 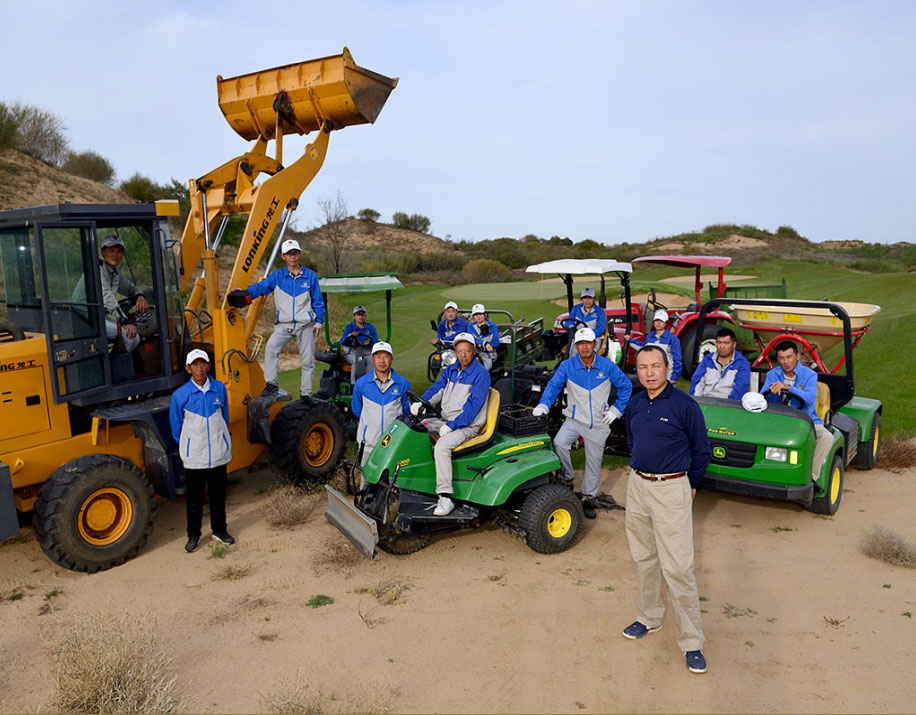 There was an interesting story during Lu’s rolling work, that is a new worker came to work for the course construction, and when she saw Lu was planting the Salix psammophila and praised him “what a hard working old man”! The interesting story could not demonstrate the happiness and joy Lu had when he shaped 22 greens including the practice green by his own hands. In 2019, Yulin Desert Course finally unveiled its mystery to the world. The Asian Golf Forum was held in May, and 40 experts from Asia unanimously handed out the high remarks to the greens. One of the experts gave his praising “Yulin Desert Course is a gem hidden in the desert!”

Moreover, “Yulin Desert Course is becoming one of the best golf courses in China ” was the complimentary feedback from experts in golf industry from China and the world, and even many would complement it was Lu’s metamorphosis. Perhaps the ranking told the best. In January 2020, the fourth edition of top 100 Asian Golf Course List was announced. Among the nearly 4500 golf courses in Asia, Yulin Desert Golf Course not only winning a spot in the List but ranked 37th with high rating, breaking record for the newcomer.

While the achievement drew the cheers by northwesters, Lu Jun was humbled. “If scoring myself, It will be 90 at the most.” Rather that modesty, Lu was aiming to the depth of history, “the ultimate test for a golf course would be if it still got high remarks and respects when being examined a hundred years.”said as Lu’s eyes were shining, same as his black spots on his face. 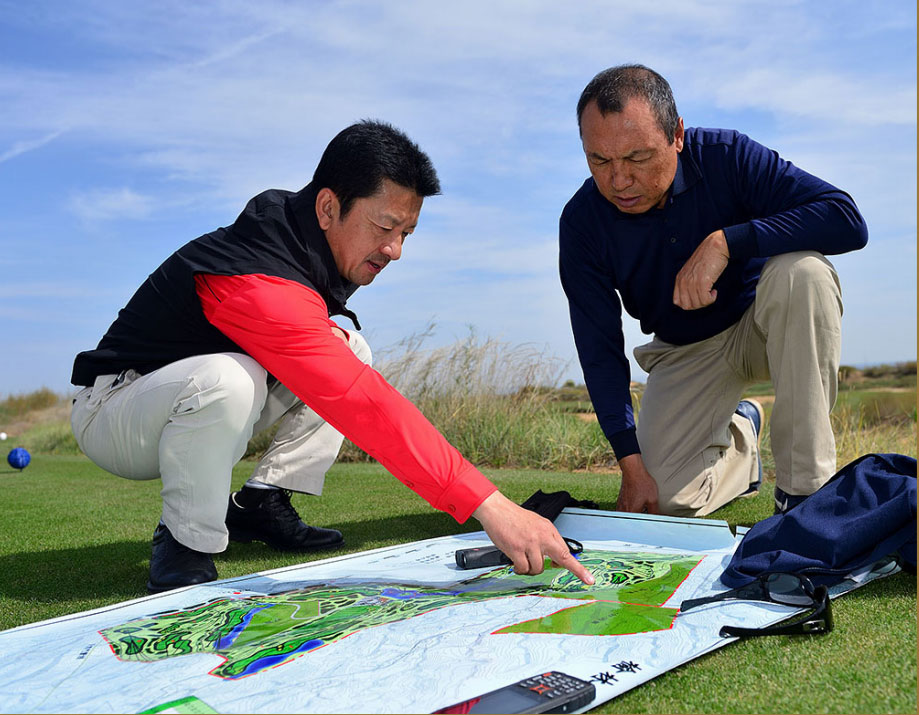 In recent years, Lu had visited lots of world’s famous golf courses. While paying a visit to the Royal Portrush Golf Course in Northern Ireland, he was very emotional, “it was the design of Harry Colt nearly a century ago, but it is never out of date by today’s players with modern golf equipment.” Royal Portrush became the venue of British Open in 2019, and it’s regarded as the gem of golf crown in Northern Ireland. Although no one could answer if Yulin would become one of the gem on the crown of golf course in the world, no one wither would deny the fact that Yulin Desert Course have been a glory jewel in the desert of northwest China.